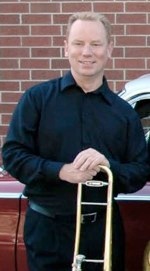 Dan Douglas is a Toronto born Trombonist and euphonium player who has been steadily working in the Toronto jobbing and Jazz scene for over 20 years. As an avid student, Dan began playing professionally while in high school and was quick to move up the ladder. His musical studies took him to Toronto’s famous Humber College where he refined his technique and found out the importance of knowing “lots of tunes”.

Dan plays regularly with the Galaxy All Star Orchestra as a featured soloist and singer. He is a member of the Alley Cats band led by Alex Pangman and has also appeared with Jeff Healey and the Jazz Wizards in concerts around Ontario and Quebec. Dan is the co-leader of the Dixie Demons. Dan also plays with many other local bands including Bob DeAngelis, Taylor Made, The Starlight Orchestra and Robin Langdon. He has recorded with artists such as Kevin Breit, Eddie Graf, George St. Kitts, Jeff Healey, Lenny Graf, Alex Pangman and others.