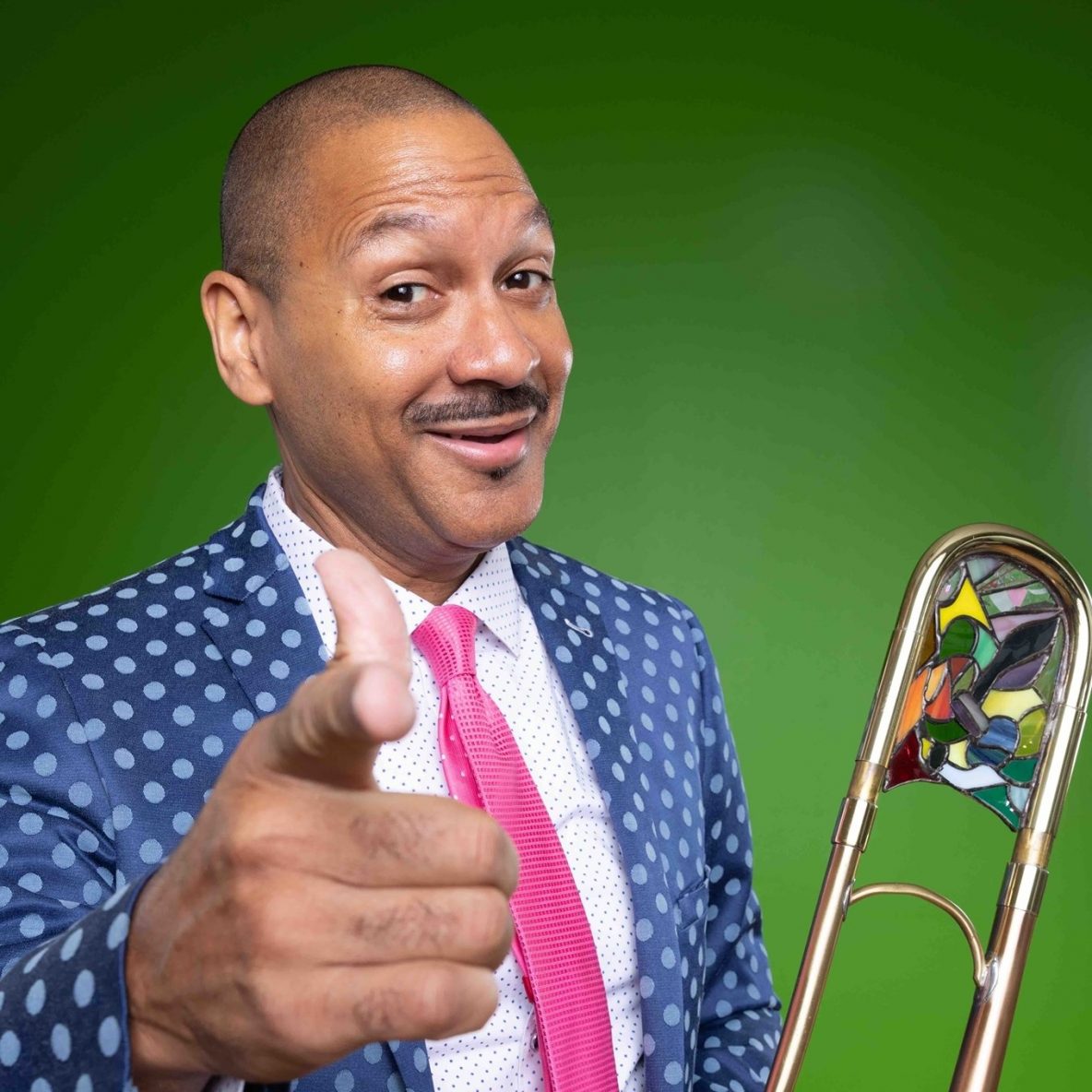 Delfeayo Marsalis is one of the top trombonists, composers and producers in jazz today. Known for his “technical excellence, inventive mind and frequent touches of humor…” (Leonard Feather, Los Angeles Times), he is “…one of the best, most imaginative and musical of the trombonists of his generation.” (Philip Elwood, San Francisco Examiner.) In January 2011, Delfeayo and the Marsalis family (father Ellis and brothers Branford, Wynton and Jason) earned the nation’s highest jazz honor – a National Endowment for the Arts Jazz Masters Award.

Born in New Orleans on July 28, 1965, Marsalis was destined to a life in music. “I remember my dad (Ellis Marsalis) playing piano at the house, and me laying underneath the piano as a child, listening to him play. After briefly trying bass and drums, in sixth grade I gravitated towards the trombone, which was an extension of my personality. Early on my influences and inspirations included J.J. Johnson, Curtis Fuller, Al Grey, Tyree Glenn and Tommy Dorsey.” Marsalis attended the New Orleans Center for Creative Arts high school, was classically trained at the Eastern Music Festival and Tanglewood Institute, and majored in both performance and audio production at the Berklee College of Music.

About the time that he first started playing trombone, Marsalis was already greatly interested in the recording process. “When I was in fifth or sixth grade, my brother Branford showed me how to create a feedback loop on a reel to reel machine. At that time there was a real need in the family for demo tapes. In fact I was recording Wynton when he was in high school. When I was in seventh grade, he challenged me to have his demo tape sound on the same level as Maurice Andre’s classical studio recordings. It was all trial and error and I learned a great deal.” From the age of 17 until the present, Marsalis has produced over 100 recordings for major artists including Harry Connick, Jr, Marcus Roberts, Spike Lee, Terence Blanchard, Marcus Roberts, Adam Makowicz, Nicholas Payton, the Preservation Hall Jazz Band and the projects of Ellis, Branford and Wynton Marsalis.

In addition, Marsalis is an exceptional trombonist who toured internationally with five renowned bandleaders. “Art Blakey taught me a lot about patience and how to construct a solo. My compositions are influenced by Abdullah Ibrahim’s harmonies. Slide Hampton inspired me with the relaxation that he displays in his trombone playing along with his command of the instrument. With Max Roach, I learned that I had to be on top of my game every moment. And Elvin Jones, who I worked with for seven or eight years, taught me about humanity, expressing myself through my instrument, and how to keep time without relying on other players.” During a tour with the Lincoln Center Jazz Orchestra, he was filmed as part of the Ken Burns documentary, Jazz and he was an integral part of Marsalis Family: A Jazz Celebration, a DVD that assembled all of the musical Marsalis’ for the first time and was featured on PBS.

As a bandleader, Marsalis has earned wide acclaim for his first three albums as a leader: Pontius Pilate’s Decision (1992), Musashi (1997) and Minions Dominion (2006). His January 2011 release Sweet Thunder, his most ambitious project yet, is a modern interpretation of the Duke Ellington/Billy Strayhorn suite Such Sweet Thunder. Rather than merely recreating the classic work, which is comprised of musical depictions of characters from William Shakespeare’s plays, Marsalis took the work as a point of departure for his octet, creating fresh and new music inspired by the original suite.

“In some ways Sweet Thunder started for me in the seventh grade when I wrote a paper on my great uncle Wellman Braud, who played with Duke Ellington in the 1920s. While attending the University of Louisville, I wrote a thesis paper on Ellington and Shakespeare. For the project, I went to the Smithsonian and studied the original copies of the music for Such Sweet Thunder. I didn’t want to just play what Duke Ellington and Billy Strayhorn wrote in 1957, but to imagine what they might have written if they were here today, more than 50 years later. To me this is jazz opera without the vocals, telling a story with the dramatic music.”

In addition to the recording, Delfeayo’s original theatrical jazz production, Sweet Thunder: Duke & Shak, will tour to some 35 American cities and towns beginning in January 2011.

Marsalis has also been long involved in work as an educator. In 2004, he earned an MA in jazz performance at the University of Louisville and was conferred a doctorate by New England College in 2009. He lectured in schools in 1995 on behalf of the Dallas Opera and the Bravo cable network. Marsalis served as director of the Foundation for Artistic and Musical Excellence summer program in Lawrenceville, New Jersey (1998-2002), founded the Uptown Music Theatre in 2000, and implemented its Kidstown After School in three New Orleans grammar schools in 2009. He has composed over 80 songs that help introduce kids to jazz.