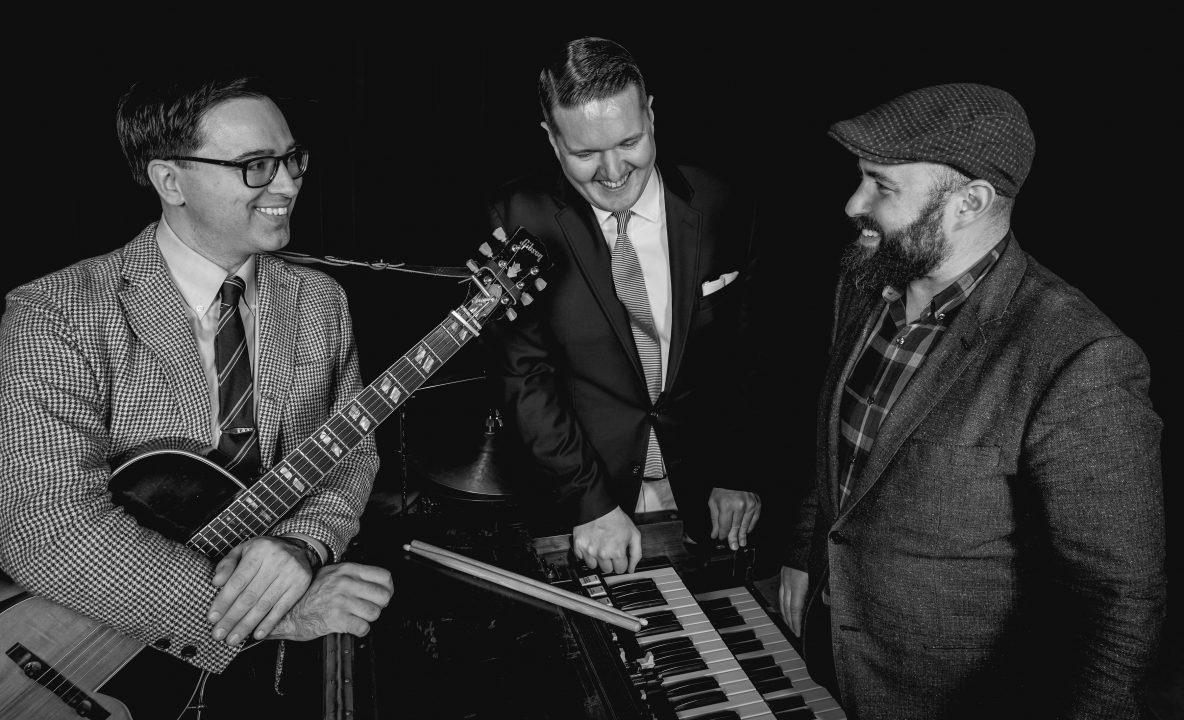 Donnybrook is an original, modern, soul jazz and straight ahead co-led organ trio from Toronto, Canada. The trio concentrates on a mix of historic repertoire and original music in the tradition of the great Hammond organ trios of the 1960s. Guitarist Ben Bishop, organist Jeff McLeod, and drummer Morgan Childs joined forces in 2015 with a mutual interest in the classic sounds of the records of Jimmy Smith, Don Patterson, Grant Green, and Dr. Lonnie Smith, as well as modern organ groups like Mike LeDonne’s Groover Quartet and the Larry Goldings Trio, with a goal to develop a unique identity and sound in that tradition. Six years later, Donnybrook has appeared across Canada at prominent jazz venues including The Yardbird Suite, Buckingjam Palace, The Bassment Jazz Club, The Rex Hotel, The Burdock Room, and 3030 Dundas, as well as at the Markham Jazz Festival, Brampton World of Jazz Festival, Toronto International Jazz Festival, and the Haliburton Forest Festival. Special guests with the trio have included prominent international jazz and blues artists like Chris Gale (Colin James, Blue Rodeo), David French (Broken Social Scene), Alison Young (2018 Juno nominee) and Ian Hendrickson-Smith (The Roots, Amy Winehouse, Tonight Show, Dap Kings). Their debut album, Live at the Basement was released in 2020.

BC native Morgan Childs has established himself as a first-call drummer for many leading Canadian and international jazz artists. Morgan has four recordings to his name as a leader, including 2016 release On The Street of Dreams, which was chosen by the Ottawa Citizen as one of the top-10 Canadian jazz records of 2016. Awards to his credit include three consecutive CBC Galaxie Rising Star Awards in 2006/07/08 with three different groups, as well as the 2009 and 2012 Grand Prix du Jazz at the Montreal Jazz Festival, with the Amanda Tosoff Quartet and Robi Botos Trio, respectively. Other notable artists Morgan has performed and recorded with include Zach Brock (Snarky Puppy), Phil Dwyer, Kelly Jefferson, Bernie Senensky, Eric Alexander, Ingrid and Christine Jensen, Ian Hendrickson-Smith (The Roots), Kirk MacDonald, and Pat Labarbera. In 2016, Morgan was awarded a Chalmers Prize from the Ontario Arts Council, and a grant from the Canada Council For the Arts, to study privately in New York City with jazz legends Billy Hart, Kenny Washington, and Jimmy Cobb. The culmination of his experience results in a distinctive, energetic, and musical approach to the drums that is steeped in the bebop tradition of his mentors, yet is forward-looking and diverse enough for the most contemporary of jazz artists. Morgan has appeared on stages across Canada and around the world, including tours of the US, Mexico, England, Ukraine, and India. His latest release is the co-led “Donnybrook: Live At The Bassment”.

Ben Bishop favours a freewheeling, bop-based guitar style, most reminiscent of the classic guitarists of the 1950s and 1960s. Players such as Kenny Burrell, Wes Montgomery, and Grant Green are major inspirations to his sound and musical approach. After a number of years living in New York, during which he earned a DMA in Jazz Studies from the prestigious Eastman School of Music, he currently resides in Toronto, Canada. He regularly performs with many of the city’s finest jazz musicians and is also active as an educator.

As of late, the co-led organ trio known as Donnybrook has been a primary musical outlet for the guitarist. The trio, consisting of Bishop’s guitar, Jeff McLeod’s Hammond organ, and Morgan Childs’ drums, has a recent release on the Bandcamp platform: Donnybrook – Live at the Bassment.  On Live at the Bassment, each band member is featured as a composer and as a soloist, while the ensemble sound highlights the rare musical simpatico these musicians share. Until the unfortunate interruption caused by covid-19, Toronto residents could hear Donnybrook, each and every Wednesday night, during their ongoing residency at Parkdale’s Tennessee Tavern. The pandemic also postponed a planned collaboration with guest saxophonist Ian Hendrickson-Smith (The Roots, Amy Winehouse, Sharon Jones & the Dap-Kings) as part of a recently awarded TD Discovery Series Special Project Grant. With any luck, Donnybrook will return to active club duty, post-pandemic, at a venue near you!

Jeff McLeod is a well-loved Canadian pianist, Hammond organist and composer that regularly appears at clubs and festivals across Canada and the US, and has appeared on dozens of recordings across the musical spectrum with a special love for jazz, soul, and rock n’ roll, several of which have been nominated for Juno Awards.

Jeff is known for his work with many great jazz groups including the Alison Young Quintet, Hector Quartet with Chris Gale and Ted Quinlan, Stubblejumpers with Ted Warren and Kelly Jefferson, the Kennedy/McLeod Quartet with Donny Kennedy, the Cuphead Video Game Big Band led by Kris Maddigan and John Herberman, as well as his co-led Organ Trio: Donnybrook with Morgan Childs and Ben Bishop. He also works with many singers, songwriters, and rockers, and is known for his long standing work in the bands of Mike Plume, Jason Plumb, Greg Cockerill, Stuart Laughton’s Radiodial, as well as musical theatre and cabaret legend Judith Lander. He has toured with Serena Ryder and performed with Bo Diddley and the Drifters. He has released three records as a leader/co-leader: Double Entendre, Belaney’s Secret (with Donny Kennedy) and Live at the Bassment (with Donnybrook).