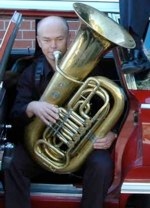 Doug Burrell was born in Montreal where he began to play the tuba at the age of seven. He studied privately in Montreal and attended Vanier C.E.G.E.P. Doug moved to the Toronto Area in 1976. From 1977 to 1981 he attended the Faculty of Music, University of Toronto where he studied with Claudio Engli.