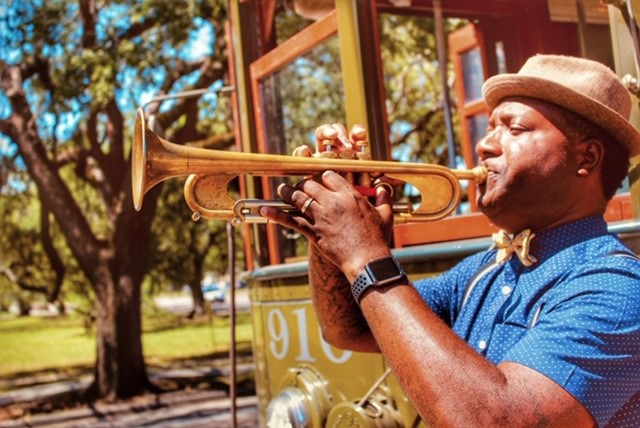 Dr. Brice “Doc” Miller is a second-generation New Orleans Grammy-nominated jazz musician and award-winning educator, anthropologist and ethnomusicologist. Growing up in New Orleans culture alongside his father, saxophonist Dwight J. Miller, co-founder of the Original Pinstripe Brass Band, “Doc” began participating in the city’s brass band culture around age 11, first as a Grand Marshal, then as a cornetist/trumpeter. As a student at Andrew J. Bell Junior High School, Miller began performing in the famed French Quarter on Saturday’s and Sunday’s with the Olympia Kids Brass Band, led by trumpeter, Harold Batiste. It was during this time he also began performing with his dad’s band. As a student at the prestigious St. Augustine High School, a private catholic school for Black boys, Miller marched in the school’s world renowned Marching 100 and also formed his own Mahogany Brass Band, formerly Junior Pinstripe Brass Band. By his teens, he was attracting attention for his musical virtuosity and business savvy as well.

He attended Xavier University of Louisiana (New Orleans) where he received a Bachelor of Music Education and Master’s of Education Administration and Leadership. After the levees failed in New Orleans on August 29, 2005, Miller relocated his family to Columbus Mississippi, then Tuscaloosa Alabama, where he became an Assistant Director of Diversity and Intercultural programs for the Division of Community Engagement. While working at UA, Miller was persuaded by his mentors to pursue a doctorate degree. On December 14, 2014, Miller graduated from UA with a Interdisciplinary PhD, with an emphasis in Educational Administration, Cultural Anthropology and Ethnomusicology. In 2017 he founded ArtsNOLA, a cultural education program that partners with schools and academic programs to engage and teach young people about the wealth of indigenous cultural ecosystems in New Orleans.

Musically and artistically, Dr. Miller is known for his creative abilities to breathe new life into traditional jazz songs, his gift for song writing and his awe-inspiring hyper energetic stage presence. His band, Ecirb Müller’s Twisted Dixie has become one of the most popular bands in New Orleans, performing a mixture of funk inspired traditional jazz and popular songs. His Mahogany Brass Band remains one of the most requested and popular brass bands for festivals and private events. Dr. Miller is also a trumpeter and principle vocalist in the uber popular big band, Delfeayo Marsalis and the Uptown Jazz Orchestra, where his song “I’m So New Orleans” has become an anthem for the city of New Orleans.

Dr. Miller is also CEO and founder of The New Orleans Music Company, a entertainment services and production company focusing on sharing the music and cultural performances of New Orleans with the world. As one of New Orleans most respected and requested musicians (he’s also a popular DJ!), Miller is the epitome of a New Orleans jazz man. With a velvety deep baritone voice and buttery smooth trumpeting style, plus a personality and smile that will turn the gloomiest day sunny, from jazz to funk, brass band to trad jazz, big band to hip-hop, Dr. Brice Miller is so New Orleans!

You can follow “New Orleans’ Most Interesting Musician” at: www.iambricemiller.wordpress.com on Facebook (Brice Miller) and Twitter @iambricemiller. You can learn more about his music at: www.thenomc.com (The New Orleans Music Company).