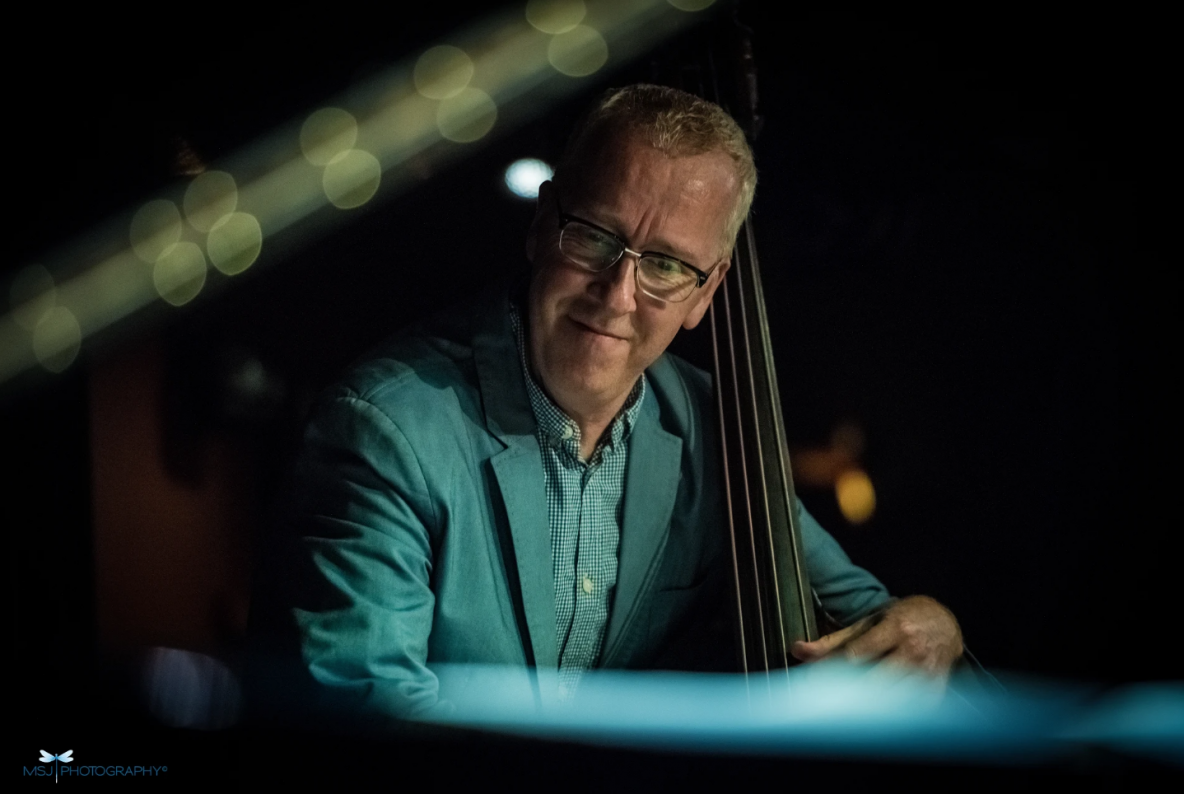 Double bassist Duncan Hopkins has been busy establishing himself as a composer, arranger and educator around the world being likened to the best:

“St.Catharines has given the jazz world one important composer…Kenny Wheeler. It may have another one … in the person of Duncan Hopkins.” Globe and Mail
“(Duncan’s) strength’s lie in his writing and sense of textural organisation, which show him willing to stretch, push or otherwise challenge style and format.” Globe and Mail

Born in Coventry, England in 1967, his family left in 1971 to live in Canada. Coincidentally moving to Ken Wheeler’s childhood town of St. Catharines. Duncan studied music from a young age without much bother but in 1987 he was asked to play bass for his high school choir and a life long love of the bass and jazz was formed. He soon met Ken Wheeler who encouraged him to continue his musical pursuits and even suggested he do a recording which was later released as “Le Rouge,” a nickname he acquired in St. Catharines after a stint in Montreal.

Aside from his own projects, he is a popular sideman for a wide variety of artists world-wide such as Dianna Krall, Mark Murphy, Kenny Wheeler, Norma Winstone, Scott Hamilton, Sheila Jordan, Sam Rivers and arrangers such as Robert Farnon and Ralph Carmichael as well as being a four year member of the much lauded Rob McConnell and the Boss Brass. He has toured extensively throughout Canada, Great Britain, Europe, Brazil and the United States. He can be heard on over forty albums, numerous CBC, BBC and NPR recordings.

Duncan’s solo albums which feature all original material from the leader, have received international acclaim : Le Rouge (1994) “This CD is Excellent!” {Cadence Magazine NY, USA} and Kindred Spirits (1996) “..a high grade release where the writing…is as impressive as the playing.” {The Toronto Star}. Snapshots (2000) “Snapshots …. is an impressive and accessible CD of contemporary jazz….(it) lends the disc (to) an early 60’s Miles Davis Quintet feel {Downtowner 2000}. and from the U.K. the Anglo/Canadian Project has also been garnering a lot of attention for Secret (2002) “Make the effort to get this exceptional CD. {Phil Erenshaft Whole Magazine} and “very intelligent, sharp and very musical.” {John Fordham The London Guardian U.K.} The newest addition to Duncan’s discography is the stunning Red & Brassy (2006) with the Canadian Staff Band of The Salvation Army. “Duncan Hopkins adds an inspired voice to Canadian jazz composition with his masterful Red & Brassy, offering a fascinating glimpse into the past, present and future in one invigorating breath.{ e-jazznews} and “This CD is a remarkable musical accomplishment – highly recommended!” {Wholenote Magazine Mar 01, 2006}

Duncan has won several awards including the Jazz Du Prix in 1999 from the Montreal Jazz Festival and has been nominated for the Juno’s (Secret), the Durham Music Society’s awards (Snapshots) and was nominated in 2006 for bassist of the year from the National Jazz Awards. Most recently he won a Canada Arts Council award for composition for brass band and jazz quartet.

He is currently a visiting professor of jazz studies at the prestigious Royal Academy of Music as well as an occasional tutor at the Guildhall School of Music and the Junior Academy of Music in London, U.K. He is also a part of the Global Music Foundation giving master classes throughout Europe, most recently in Tuscany, Germany and Belgium. He has written many published articles and reviews for Double Bassist magazine in the U.K. and is an endorsing artist for Acoustic Image amplifiers and Velvet strings.