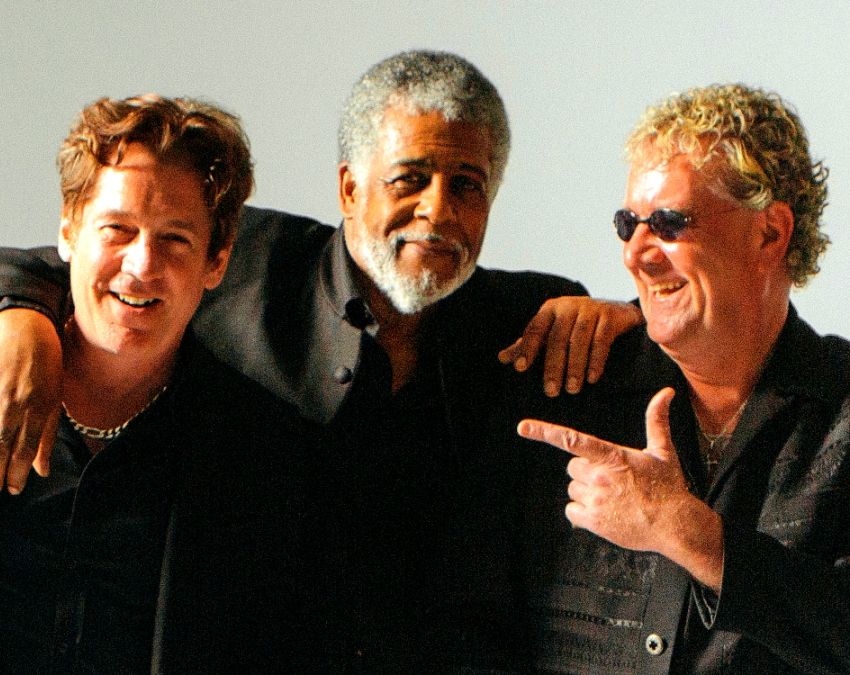 When at home in Canada they’ve remarkably held a 18 year residency at the legendary Orbit Room in Toronto on Wednesday nights.

Leroy Emmanuel
Lead Vocalist and guitarist Leroy Emmanuel has been a dedicated musician and entertainer for most of his life. Born in Atlanta, Georgia, and raised in Detroit, Michigan, he began his professional career at the age of twelve and has since toured all over the United States. Leroy endorses Rivera amplifiers.

Hard Hittin’ Mark Rogers
Mark Rogers is the model of versatility, both musically and professionally. Along with full-time gigs anchoring the award winning Gospel Soul of Newworldson and seasoned funkateers LMT Connection, he also finds time to maintain a busy recording schedule and operate his own production company New Century Productions. Life moves fast for the in-demand drummer and producer and he wouldn’t have it any other way.

A lifelong native of Niagara Falls, Canada, Rogers started playing drums when he was eight years old; by the age of eighteen, he was recognized by the Canadian Jazz Festival as the top drummer in the country for his age group. Shortly thereafter he began performing with a ten-piece Motown revue touring all over North America with legendary guitarist Leroy Emmanuel. When the Motown revue came to an end, Rogers and Emmanuel, along with bassist John Irvine, formed LMT Connection.

Mark Rogers with MWSIn 2005 Mark became a founding member of Newworldson. To say their rise was meteoric would be an understatement. Within eight years, Rogers and Newworldson have been awarded 11 Covenant Awards by the Gospel Music Association, 4 Juno nominations for Contemporary Christian/Gospel Recording of the Year, a # 1 video for the single “Working Man” on the US Gospel Music Channel, and had the biggest selling debut album for EMI CMG in 2008 with their CD “Salvation Station”. But it was 2010’s self-titled sophomore album that catapulted the group to new heights, thanks to the success of their worldwide smash hit “There is a Way,” Newworldson’s first No. 1 single. In 2012 “Learning to be the Light” peaked at #3 on the US Gospel and Christian charts with the release of the “Rebel Transmission” CD.

These accolades, combined with their electrifying live show, landed them headlining spots on festival stages in 2010-2013 in the US, Canada, Australia, New Zealand, Sweden, Norway, Holland, England, Germany, Switzerland, Denmark and Belgium.

“Big Bad” John Irvine
One of the most exciting bass players out of Canada is Ottawa native John Irvine. Having played professionally since the age of twelve,John Irvine his credits include working for Capitol and RCA Records with such diverse artists as Ronnie Hawkins and Liberty Silver.

An innovator with effects, John has designed pedals for Zoom Sound Laboratory and recorded with EDM superstar Deadmau5

HISTORY:
Veteran soul group LMT Connection has been turning music fans into full-blown funkateers for more than a quarter century, playing over 5500 shows, helmed by a front man on the cusp of his 70th birthday. True masters of their craft, they’ve toured internationally and released five self-produced albums independently, without the support of a record company.

Born in Atlanta and raised in Detroit, singer/guitarist Leroy Emmanuel was not only an active member of Motown’s thriving music community at its height, supporting the likes of Marvin Gaye, Bohannon, and Bettye Lavette, but an influential artist in his own right, earning a significant cult following with his group The Fabulous Counts (Westbound Records). Not long after a serendipitous relocation to Niagara Falls, Canada, Emmanuel founded LMT Connection with drummer Mark Rogers and bassist John Irvine. The year was 1989 and the newly formed trio hit the ground running.

For LMT Connection, funk is truly the final frontier; the expedition progresses unabated, and the borders continue to be explored and re-drawn.

AWARDS:
Mark Rogers has received 4 Juno nominations with his work with NEWWORLDSON.