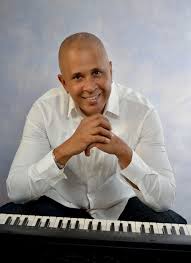 Miguel De Armas is a versatile jazz pianist and composer. He weaves strands of Cuban and American jazz influences in a compellingly eclectic way. Born in Havana, Cuba, Miguel studied at the Conservatory Amadeo Roldan and graduated from the Instituto Superior de Arte with a Bachelor in Cuban Percussion.

In 1988, he co-founded the acclaimed Cuban band NG La Banda Orchestra with José Luis Cortés and other prestigious Cuban musicians. For over a decade, he toured with this band around the world and performed at world-class Jazz Festivals such as the North Sea, Montreaux, Nice, Nantes, Normandia, Couleur Café, Barranquijazz, Río de Janeiro Film Festival, among others.

In collaboration with other members of NG La Banda, Miguel recorded the award-winning album The New Cuban Jazz Volume I at Marsol Studios, Costa Rica. It was deemed the 1997 Best Jazz Record by Bis Music.

Now Miguel has brought his musical talents to the city Ottawa, Canada which he considers his adopted home. His hope is to introduce Canadians to the works of an original Cuban talent whose performances are nothing short of a master class in original Cuban jazz rhythms.