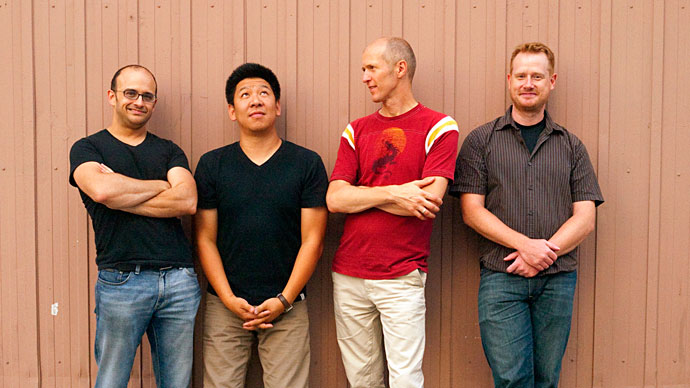 With influences ranging from Wayne Shorter to J Dilla to Levon Helm, The Worst Pop Band Ever is a Toronto based group that has been trying to combine their love of improvisational jazz and indie pop for the last 10 years. The band has been featured on CBC, JazzFM, NOW, allaboutjazz.com, the Toronto Star and performed/toured/recorded with everyone from Elizabeth Shepherd to Amanda Martinez to Rich Underhill. They’ve filled clubs and festivals across North America, from Newfoundland to Vancouver Island, the band will be touring their latest album, Blackout – a suite based on the great Northeastern Blackout of 2003.

“Indeed, titles can deceive. When it comes to the Worst Pop Band Ever, don’t assume it’s about pop. Don’t even assume it’s about jazz. But know that it’s about some of the most clever, talented and wide-ranging musicians in the nation. ”
– Dennis Slater, FFWD magazine

“The [WPBE]’s title displays a sense of humor and frivolity, but in name only…. Street wise yet substantive, these compositions would appeal to fans of Vijay Iyer, Brad Mehldau, or DJ Logic…is hip enough and deep enough for jazzers and non-jazzers alike.”
– Mark J. Turner, allaboutjazz

“The Worst Pop Band Ever is the total package – great compositions, unique covers and standup-worthy comedic banter… a highlight of the festival.”
–  Mike Deicont, torontojazz.com

The music’s fresh, may appeal to pop lovers but assuredly to jazzers keen on a kind of driven fluency as genre stylings are examined, discarded and reworked.”
– Geoff Chapman, Toronto Star

“Of course Jazz isn’t dead. The core idea of using pop music as source material for creative exploration is still very much alive…It is easier to appreciate (and follow) where these artists take the music when you already understand where they started… Snarky Puppy, Mehliana, The Worst Pop Band Ever… ”
– Kevin Hurley, Huffington Post

” A bunch of delightful jazz subversives north of the border who revel in adding an edge to pop melodies.”
– Victor Aaron, somethingelsereviews.com, Best of 2009