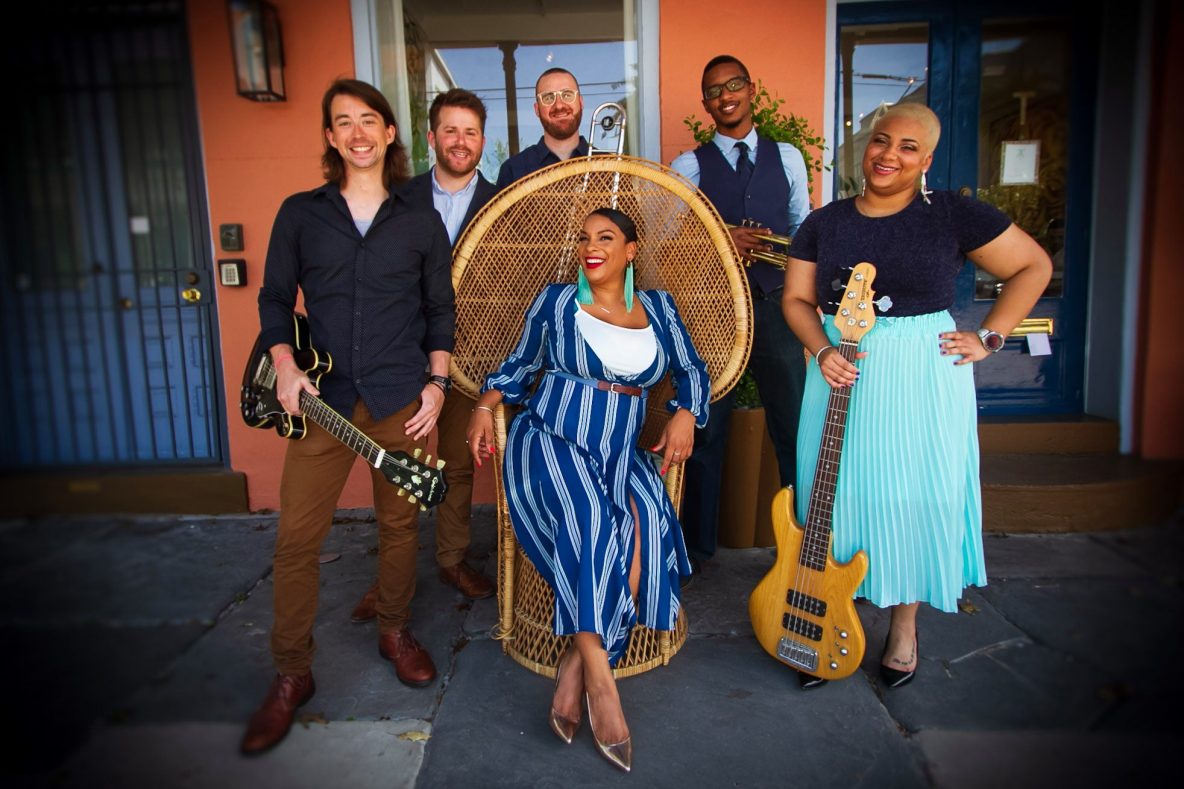 Jessica Wright
Born with a heart for music and a genuine passion for performing, Jessica Wright descends from a musical lineage that traces back four generations. The New Orleanian began her musical journey by playing flute in the late ‘90s, but quickly fell in love with the low end and switched to bass guitar in 2003. While in college, Jessica played both electric and upright bass. There, she joined the St. Edward’s University Jazz Ensemble (Steady) and was the bassist for Austin jazz group, “The Altered Five.” After completing several studio recordings with Steady, Jessica moved back to New Orleans in 2012, where she began performing at numerous local venues and festivals, including Jazz Fest with artist Quinten Corvette. As a founding member of the all-female group, Girl Power – which has evolved into the current day Vegas Cola Band – she’s been working collaborating with Vegas Cola for almost a decade.

Originally from Tampa, FL, Chris began his musical training playing drums in the second grade. In addition to learning the piano and guitar, he picked up the trombone upon entering middle school, eventually making it his primary instrument. After graduating from Howard W. Blake High School, Chris began college at the University of South Florida in Tampa before transferring to Florida A&M University in Tallahassee, FL where he studied Music Education and Jazz Studies.

While there he was an active member of many performing musical ensembles on campus including The Marching “100”, Wind Ensemble, Jazz Band and Combo, Brass Ensembles, Trombone Ensembles, and others.

He moved to New Orleans in the summer of 2012 to begin a career as a professional trombone player. Since then he has performed and toured the world with many ensembles including the Free Spirit Brass Band, Red Wolf Brass Band, BOOC The Band, Saint Roch All-Stars, Caesar Brothers Funk Box, James Andrews and the Crescent City All-Stars, Yisrael Band, Trumpet Black & The Heart Attacks Lagniappe Brass Band, Mainline and many more.

With his diverse musical background and a love for all styles of music, Chris uniquely brings a brash, soulful and warm sound to the trombone. Channeling everything from jazz, blues, funk, rock n roll, neo-soul, and that classic New Orleans trombone sound, he captivates and entertains audiences around the globe.

Brandon Nater
Hailing from Queens, NY, Brandon Nater is a fast rising trumpet player in the New Orleans music scene. He got his start at age 14 performing at military ceremonies both as a solo musician and as a guest with the US Army Band in New York and DC. Brandon was first introduced to jazz and improvisation after college, however his move to the Crescent City is what kick started his budding music career. Since arriving in New Orleans in 2016, Brandon has become an in-demand musician, performing several days a week, playing everything from jazz and classical to Latin and R&B. He’s a pivotal member of Vegas Cola Band’s “Hot Boy Horns” section and one of the newest additions to the group.

Matt Galloway
Growing up in Tennessee and playing the local blues and rock clubs at a young age, Matt Galloway is an exciting and dynamic guitarist. He then received a scholarship to MTSU where he was formally trained in classical and jazz. After graduating he began spending time in New Orleans before moving there in the summer of 2011. Since that time he has maintained a busy gig schedule playing with many talented artists such as Mainline, Bo Dollis Jr. and The Wild Magnolias, Organami, Ted Hefko and The Thousandaires, and many others. He also leads his own funk band, Champion Swag, whose name was given by the comedy legend Dave Chappelle while visiting New Orleans. Now as part of the Vegas Cola Band, Matt’s uniquely blended take on soul, funk and jazz serves as one of the most exciting components to the band’s overall sound.

Will Feinberg
Will Feinberg is a New Orleans-based keyboardist and composer. Combining jazz sensibilities with a deep love for all things soul, he creates a modern sound that leaves audiences immersed in the groove long after the music has stopped. Originally hailing from Detroit, Will comes from a family full of musicians and has played piano his entire life. Since moving to New Orleans in 2015, he’s blossomed into an popular pianist on the local music scene and consistently performs at the city’s top venues and festivals. Propelled by a natural passion for writing music, he’s contributing original songs for the upcoming Vegas Cola Band EP and is looking forward to releasing his own first album at the end of this year.