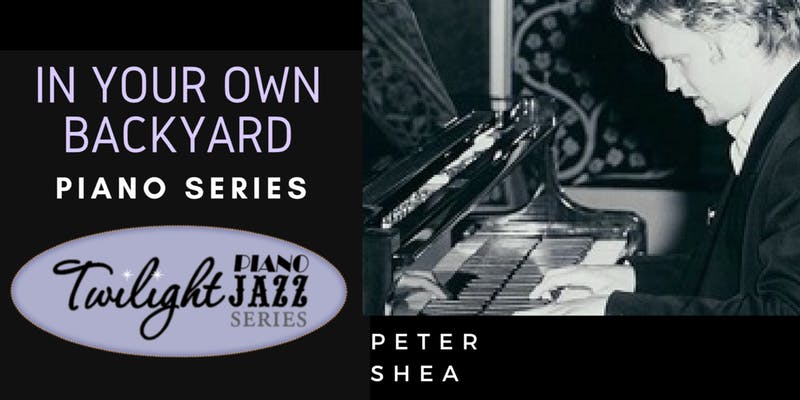 “We love organically grown events and this upcoming series we have planned is no different. Local jazz pianist Doug Mundy has recently purchased a Steinway grand piano that we are storing at our Shady Acres Studio. We know how our jazz fans LOVE the intimate concerts so we thought why not do one ‘In our own back yard’.  Not only is the series literally in our back yard all of the piano players we are featuring are local. These 4 pianists are incredible and each of them are going to take you on a journey as they pay tribute to some of the greatest jazz pianists and composers of all time.”

Born and raised into an Irish/Icelandic family Peter Shea began his lifelong love affair with music surrounded by a family of musicians and music lovers. In 1995 Peter graduated from the University of Toronto with a degree in Jazz Performance and Composition.

Peter Shea’s extensive resume includes performing on keyboards for the hit Toronto Second City dinner theatre show “Tony and Tina’s Wedding”; touring across Canada with comedian Sean Cullen; performing for a month at the world famous Edinburgh Comedy Festival on both keyboards and drums, including several live performances on BBC Television and Radio; performing on keyboard with the Jersey Boys in Toronto; a cross-Canada tour with the famous Montreal “Just for Laughs” Road Show including the Pantages and Massy Hall theatres.

Along with his wife and musical partner, Juliet Dunn, Peter Shea has performed in over forty countries as a bandleader, vocalist and keyboard/piano player.

Currently, Peter and his wife Juliet run the Twilight Jazz Series in Niagara (now in its 6th year – www.twilightjazz.ca) and the duo also created and run the TD Niagara Jazz Festival.  (Currently, the ‘Best New Festival’ in Ontario (2017) and in its 4th year.  www.niagarajazzfestival.com)
With his long musical lineage, Peter Shea is considered one of Niagara’s eminent jazz pianist, percussionist, vocalist, composer and arranger.