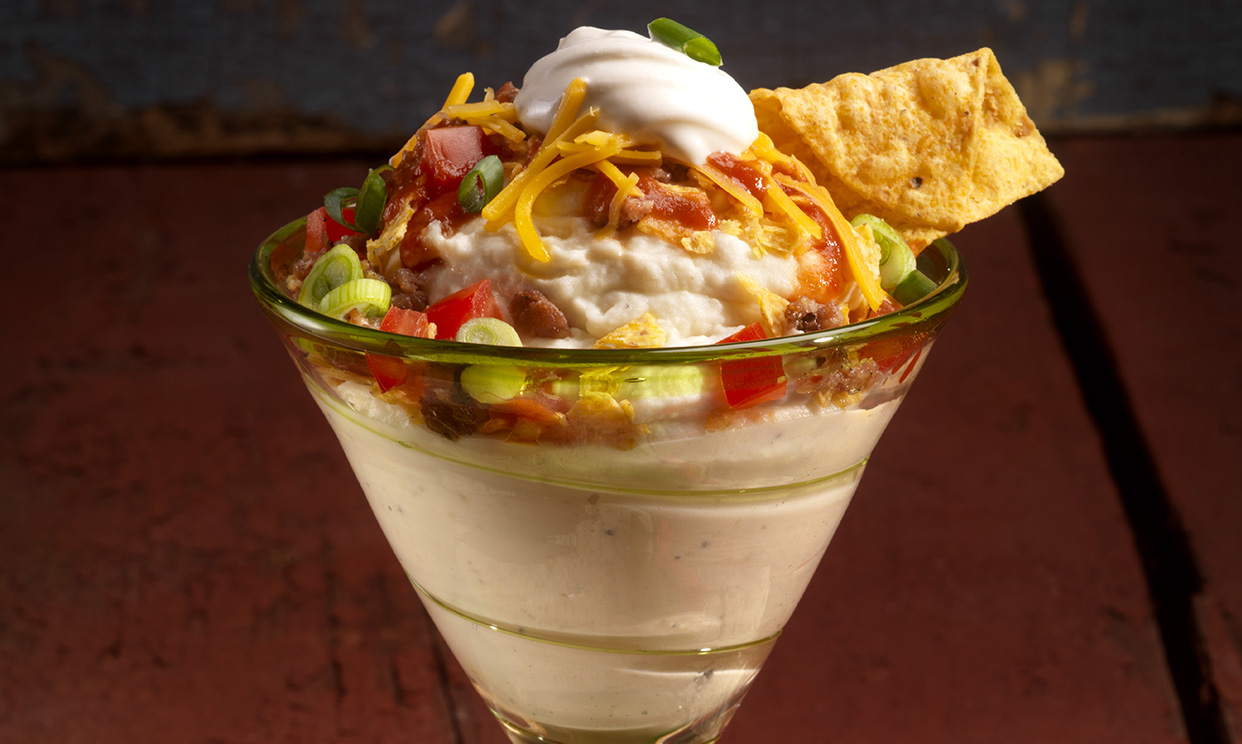 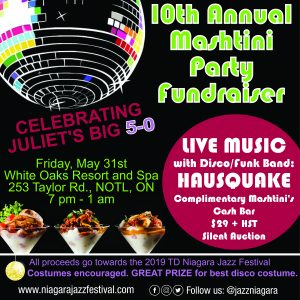 Join us for our 10th annual ‘Mashtini’ party!

The co-creators of the TD Niagara Jazz Festival invented the ‘Mashtini’ back in 2008 and turned it into a holiday tradition!

This year, for the 10th annual Mashtini party, the party has now been moved to May is a DISCO themed party, and has become an annual fundraiser for the festival.

Enjoy a complimentary ‘Mashtini Bar’, live music, lots of socializing, a cash bar and dancing all night long!  There will also be a silent auction on site featuring great gifts and experiences from the various TD Niagara Jazz Festival partners and donations to the festival will be graciously accepted as well!

*If you can’t make the fundraiser but would still like to donate you can do that too!  🙂

ALL proceeds to benefit the 6th annual Not-for-Profit TD Niagara Jazz Festival. Thank you for helping us keep jazz alive in Niagara!

If you would like to book a room for the night to avoid driving home after the party CLICK HERE.  Our partner White Oaks Resort and Spa is offering all Mashtini Fundraiser guests a discount on their stay! 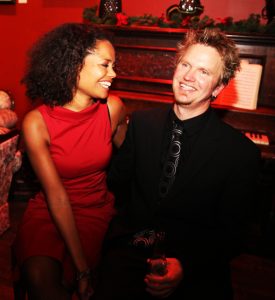 Juliet Dunn and Peter Shea were performing at the Toronto Convention Centre for a Tourism event back in 2009 representing the Niagara Region. Each province was represented at this event and on their break, they ended up having a snack at the Prince Edward Island booth.  Being true to its environment the PEI booth was featuring potatoes and they had a mashed potato bar set up. The duo indulged in a welcome snack which was served up in a martini glass. Peter said to Juliet, ‘Hey, it’s like a ‘Mashtini’!’.  The duo doubled over in laughter while the representative looked quite confused and unimpressed.  They exited graciously with their delicious snacks and were chuckling for hours over the term ‘Mashtini’.

A few weeks later they had an early Xmas dinner for their family that was visiting and afterward had quite a bit of turkey leftover.  Juliet suggested using it for a ‘Mashtini’ Holiday party for their friends and was convinced that they had invented the term ‘Mashtini’ so she decided to # the parties.  And so in December of 2008, the first annual ‘Mashtini’ party was born!

Since the duo are both musicians and many of their friends are in the arts, they would always host the party on a weeknight.  It would start with Mashtini’s upstairs and would finish with a live music jam in the basement.  Their annual Mashtini has become a coveted event amongst their friends and family. In 2017 Peter and Juliet moved ‘Mashtini Madness’ to March due to their busy schedule with their ‘Music of a Charlie Brown Xmas Show’. And in 2018 they invited their festival partners and sponsors to make it their sponsor recognition event.  Up until that date the party had always taken place in their home but due to the popularity of the event, it is now hosted at one of their favourite festival partners:  White Oaks Resort and Spa.

The 10th annual Mashtini party is coming to town on Friday, May 31st, 2019!  Peter and Juliet hope you can join them at their mashup!