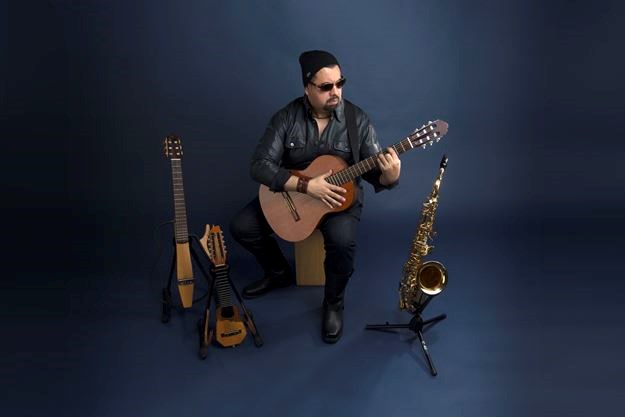 ABOUT
Romulo Delgado’s performance career began by playing guitar, tenor saxophone and singing with local Latin American ensembles here in Toronto as a teenager. After performing and touring for several years with many Latin bands and world music ensembles, Romulo’s meeting with a fellow musician, a classical violin player from Serbian would prove to be a life-changing event.
Encouraged to study classical music and opera and after many years of study and performance, Romulo Delgado has become one of the most in-demand leading operatic tenors. Nonetheless, he never abandoned his early musical roots and continues to collaborate with latin american and world music ensembles combining his solid classical technique and his passion for all styles of music.

Romulo Delgado is a classically trained tenor, a world music vocalist and multi- instrumentalist. He was a region finalist at the Hans Gabor Belvedere International Opera competition in Vienna, Austria. He trained in Toronto at the Royal Conservatory Music and the Glenn Gould School. His versatility as a performer has enchanted audiences all over North America and Europe as well various Canadian Prime Ministers and former U.S. president Bill Clinton. Ultimately, what distinguishes Romulo’s singing is that “striking, powerful and ingratiating lyric tenor sound with all the money notes!” (Opera Canada) In addition to being an accomplished operatic tenor, his versatility as a musician has also allowed him to be equally as successful in the world music scene. The ability to sing in 7 languages has allowed him to record with many international and local recording artists and be engaged by several of the fortune 500 corporations. His world music shows have been called “ a revelation of immense talent and versatility” (Toronto Star). Whether on the opera stage or enchanting audiences with his world music passion, “Romulo Delgado’s free, vigorous & lustrous tenor voice makes him one of Canada’s most unique performing artists.” (The Globe and Mail)

ORQUESTA FANTASIA made its debut on January of 1978, at Toronto night club “COCONUT”. Since then it has been participating in many of the big events in the Latin American community; amongst the highlights include alternating with Oscar D’Leon, Eddie Santiago, Sonora Matancera, Coco Band, Son De Azucar, Nelson Ned, Combo De Las Estrellas and El Gran Combo de Puerto Rico just to name a few international acts. But it was in 1989 when ORQUESTA FANTASIA crossed over to the Canadian market, making successful appearances at festivals and awards ceremonies such as The Du Maurier Jazz Festival in Toronto, The Montreal International Jazz Festival, The Beaches International Jazz Festival, The WOMAD Festival, The International Hispanic Fiesta, The Corso Italia Toronto Fiesta, The Toronto International Salsa Festival, The Tropicanada Festival, The Latin Fest at Ontario Place, The International Hispanic Fiesta at Harbourfront and Mel Lastman Square and The Genie Awards. ORQUESTA FANTASIA has also been featured in movies such as “That Old Feeling” (1997 with Bette Midler, Paula Marshall, David Rasche and Dennis Farina) and “Woo” (1998 with Jada Pinkett Smith, Tommy Davidson, Dave Chapelle, LL Cool J and Foxy Brown). ORQUESTA FANTASIA has also been recorded in 5 major CD productions sold all over the continent that features compilation tracks as well as original material. Two of these CD’s were numbered to sell 80,000 to 100,000 copies each. ORQUESTA FANTASIA also performs regularly at Clubs, Convention Centres and Banquet Halls all over the province of Ontario.
Considered one of the pioneer Latin bands, it has maintained a high level of excellence and a unique style, which has kept it in the public’s as well as the media’s eye for such a long time.
Founded by lead singer Victor Yanqui, the band performs a variety of Latin styles including Salsa, Merengue, Cumbia, and Bachata. It is made up of 12 musicians, with the following instrumentation: bass, piano, guitars, four-piece percussion section (bongos/tambora, congas, timbales and hand percussion), five-piece brass section two trumpets, two saxes and one trombone, lead and back up singers. ORQUESTA FANTASIA has encompassed many rooms and packed every dance floor for 30 years with its BIG rich sound that is equally pleasing to the listener and to the dancer!