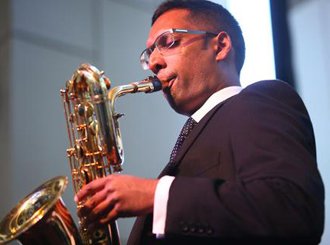 Two-time JUNO-nominee Shirantha Beddage is a baritone saxophonist and composer. His newest album, Momentum, was nominated for Jazz Album of the Year (Solo) at the 2017 JUNO awards. His compositional skills have garnered him accolades such as the 2013 Galaxie Rising Star Award at the Montreal Jazz Festival.